Lizzie Andrew Borden (July 19, 1860 - June 1, 1927) was an American woman who was tried and acquitted in the 1892 axe murders of her father and stepmother in Fall River, Massachusetts.  Following her release from the prison in which she had been held during the trial, Borden chose to remain a resident of Fall River, Massachusetts for the rest of her life, despite facing significant ostracism.  The Commonwealth of Massachusetts elected to charge no one else with the murder of Andrew and Abby Borden, and speculation about the crimes continues into the 21st century.

Nathan Leopold and Richard Loeb were two wealthy University of Chicago law students who kidnapped and murdered 14-year-old Robert "Bobby" Franks in 1924 in Chicago.  The duo was motivated to murder Franks by their desire to commit a perfect crime.

Once apprehended, Leopold and Loeb retained Clarence Darrow as counsel.  Darrow pleaded for leniency, and ultimately saved the two from death.  Leopold and Loeb were sentenced to life imprisonment.  Loeb was killed by a fellow prisoner in 1936; Leopold was released on parole in 1958, and died of a heart attack at age 66 on August 29, 1971.

Bruno Richard Hauptmann was convicted in February, 1935 of the abduction and murder of the son of Charles Lindbergh and Anne Morrow Lindbergh.  The 20-month-old toddler was abducted on the evening of March 1, 1932.  On May 12, 1932, his body was found a short distance from the Lindberghs' home.  The cause of death was a massive skull fracture.

Hauptmann was executed at the New Jersey State Prison on April 3, 1936.  He continued to proclaim his innocence to the end. 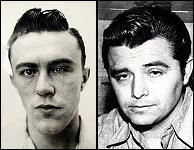 Richard Eugene "Dick" Hickock and Perry Edward Smith were two ex-convicts who murdered four members of the Herbert Clutter family in Holcomb, Kansas on November 15, 1959, a crime made famous by Truman Capote in his 1966 best-selling book In Cold Blood.

Hickock and Smith confessed to the crimes and were executed by hanging on April 14, 1965 at Kansas State Penitentiary in Lansing, Kansas.

On the evening of July 19, 1976, Gilmore robbed and murdered Max Jensen, a Sinclair gas station employee in Orem, Utah.  The next evening, he robbed and murdered Bennie Bushnell, a motel manager at City Center Inn in Provo.  Both men were killed even though they had complied with his demands.

Gilmore was tried in October, 1976, and gained international notoriety for demanding the fulfillment of his own sentence of death.  He became the first person executed in the United States in ten years, and was was executed by firing squad in 1977.

Jeffrey MacDonald was convicted in 1979 and is serving three consecutive life sentences for these murders.

At 12:10 a.m. on June 13, 1994, Nicole Brown Simpson and Ronald Goldman were found murdered outside Brown's Bundy Drive condo in the Brentwood area of Los Angeles.  Evidence found and collected at the scene led police to suspect that O.J. Simpson was the murderer.